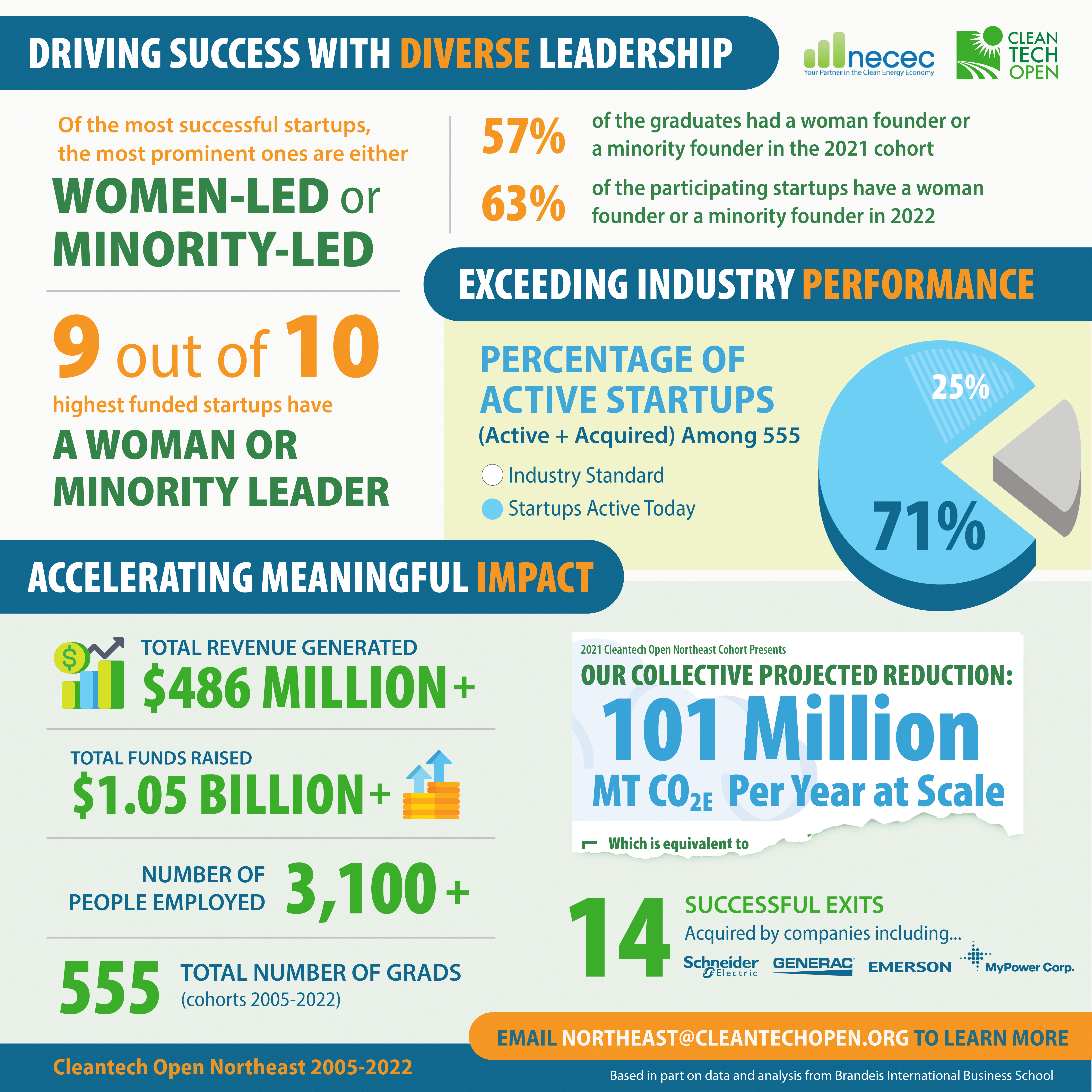 How can we define success?

For cleantech startups, there are a few key metrics that are good indicators of success:

Between 2005 and 2022, Cleantech Open Northeast (CTONE) trained 555 early-stage clean technology startups through its annual business accelerator. The program runs once a year for about six months, with the core programming during the summer months. It’s like a mini MBA – teaching entrepreneurship skills to propel startups on the path to commercialization as quickly and effectively as possible.

Each startup is matched with up to four mentors who serve as an advisory board, guiding the startup through the rigorous curriculum. After completion of the deliverables, the startups compete for cash prizes ($60,000 in 2022), showcase their innovations, and meet investors.

The entrepreneurs “graduate” with a better understanding of their market, a stronger value proposition, a more viable business model and business plan, an expanded network of industry experts, and a plan for how to further progress their business. Upon graduation, many are well on their way to raising their first funding rounds. This is a proven program designed to position cleantech startups for success.

71% of Cleantech Open Northeast alumni are still in business or have had a successful exit. They have raised more than $1.05 billion, created more than 3,100 clean economy jobs, and generated more than $486 million in revenue.

Entrepreneurship is difficult, and getting a cleantech startup to commercialization is even more difficult. Many startups close for a variety of reasons.

What’s unique at Cleantech Open Northeast is that the entrepreneurs work extremely hard and display perseverance. This is much more than a pitch competition. They practice humility through listening and taking advice from a variety of experts, as their mentors represent multiple skill sets and industries. For example, a mentor team may include a serial entrepreneur, a marketing and communications professional, a specialist in the startup’s core technology or industry, an angel or venture capital investor, and an attorney. The mentors give the startup regular feedback and encourage them to think about their business in new ways. Confidence comes when the startup receives feedback that leads to interested investors and prospective customers.

71% of Cleantech Open Northeast alumni are still in business or have had a successful exit. They have raised more than $1.05 billion, created more than 3,100 clean economy jobs, and generated more than $486 million in revenue.

From the acclaimed McKinsey & Company report Diversity Matters (February 2020), we learned that “Top-quartile companies for racial and ethnic diversity were 35 percent more likely to have financial returns above their national industry medians… Companies in the top quartile for gender diversity on executive teams were 25 percent more likely to have above-average profitability than companies in the fourth quartile.”

We did some analysis of the highest funded startup alumni. The findings were dramatic. Nine of the top ten funded companies were founded and/or are currently led by a woman or a minority (top two to three leaders). Well over half of the most recent two cohorts (2021 and 2022) had a woman or minority founder.

Nine of the top ten funded companies were founded and/or are currently led by a woman or a minority (top two to three leaders). Well over half of the most recent two cohorts (2021 and 2022) had a woman or minority founder.

These cohorts should be well positioned for success, especially because of the diversity of the founders. Since 2021, the Cleantech Open Northeast has worked with the team at Browning the Green Space to provide programming on building diversity into the startup culture, as well as how to build diverse teams. The startups appreciate the benefits of diversity and inclusion.

In 2021 the startups estimated their aggregate emissions reduction potential at 101 million metric tons of CO2 equivalent. That’s equivalent to taking twenty-two million cars off of the road annually.

In terms of environmental impact, CTONE teaches its startups how to measure their emissions reduction potential. In 2021 the startups estimated their aggregate emissions reduction potential at 101 million metric tons of CO2 equivalent per year. That’s equivalent to taking twenty-two million cars off the road annually. The startups use their calculations in conversations with investors. It’s a helpful way to start the conversation with people who are increasingly interested in environmental impact.

With increasing pressure to address the climate crisis, Cleantech Open Northeast startups are poised to make a difference, and many of them already are.

Sources included a list of Cleantech Open Northeast alumni startups, information on the founders and current executives, and data from Crunchbase. A data and business analytics team from Brandeis University International Business School pulled the data from Crunchbase and conducted analyses on that data.

Some assumptions were made in cases where Crunchbase provided a range rather than a specific number. For example, the analyst used the median numbers of the range for startups’ estimated revenue and the number of employees. For active startups not listed in Crunchbase, the assumption was one and a half employees per company.

Minorities were defined as people with ethnic origins in Central and South America, Africa, the Middle East, Asia, Pacific Islands, as well as Native Americans. Some founders are both women and minorities; the team was careful to count each person only once and to count each startup only once if they had a woman founder, a minority founder, or both.

To learn more about Cleantech Open Northeast and how you can be part of the community, please contact northeast@cleantechopen.org.